HGT is a widespread phenomenon in the prokaryotic kingdom that occurs readily under harsh environments where genetic adaptation is required for the survival of microorganisms. HGT could be useful for bioremediation to shift microbial communities in favor of degrading contaminants of concern.

In particular, plasmid conjugal transfer is one of the dominant and well-studied mechanisms of HGT in bacteria, by which resistance to toxicants such as metals and antibiotics as well as the ability to degrade complex organic compounds may be spread. In genetic bioaugmentation, introduction of environmentally-relevant bacteria harboring self-transmissible catabolic plasmids that encode for the degradation of target contaminants stimulates in situ HGT of the plasmids to indigenous microorganisms, thus resulting in an enhanced contaminant degradation potential at the polluted site.

Genetic bioaugmentation aims to transfer relevant genes into indigenous microorganisms that have greater fitness for survival in the contaminated environments as opposed to conventional bioaugmentation which relies on the survival of exogenous microorganisms. In fact, HGT has been reported to repeatedly occur naturally in contaminated sites to aid in bacterial adaptation to organic pollutants; therefore, genetic bioaugmentation aims to enhance the naturally-occurring phenomenon to further improve the biodegradation of target contaminants. This approach is likely to receive much more favorable adoption than the use of genetically engineering microorganisms (GEMs) as GEMs are heavily regulated by the U.S. Environmental Protection Agency for in situ bioremediation.

To date, GEMs have only been approved for a limited number of cases. We anticipate our findings will be widely applicable to all contaminants and that these fundamental results could ultimately be transferred to the development of new treatment strategies for lesser biodegradable contaminants as well as for the bioremediation of mixed wastes. This work is based upon work supported by National Science Foundation under Grant No. CBET-0846437. 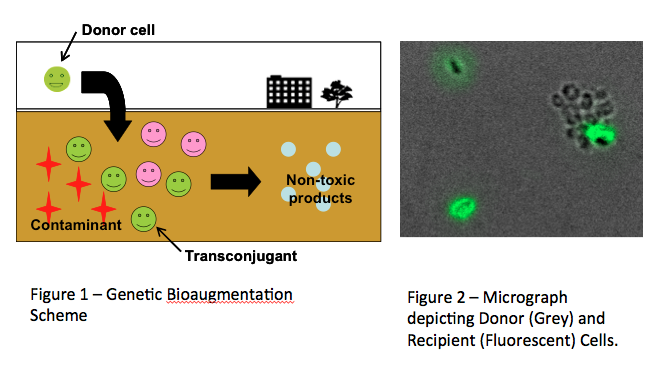 In addition, we are interested in plant-microbe synergies when degrading petroleum in saline marsh plants and soils. The Gulf of Mexico Research Initiative (GoMRI) supports this collaboration with Tulane University and Louisiana State University.